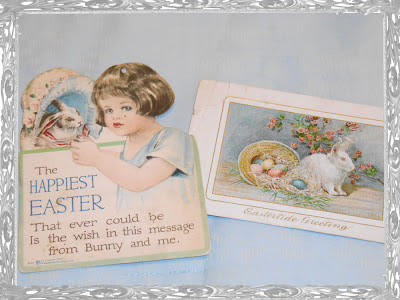 I collect vintage postcards. I display them on my desk or bookshelves and change them according to the season or holiday.

The illustration on the front catches my eye, but I enjoy reading the messages written on the back even more.

An Easter card with dancing chicks on the front says it’s also bringing wishes for a happy birthday to “dear little Kate” in 1910.

A postcard with a colorful image of a girl in an Easter hat and parasol brings the message to a father from a son, saying he’d found a job in Michigan in 1914.

An undated card from a mother to her daughter informs her that she’d sent her a box of eggs for Easter. She hoped they arrived unbroken since she had packed them well, but if not, to get after Uncle Sam, since apparently she’d sent the eggs and note with him. 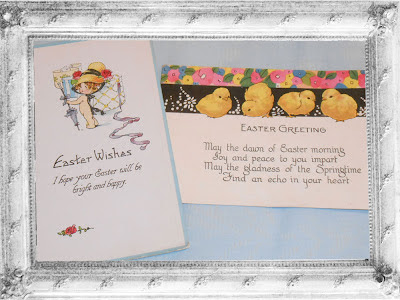 I’m sure the writers of those postcards never thought that their words would be saved and read by strangers almost a century later.

I love the idea that a card or note of mine sent to a friend or family member might be stuffed in a drawer and read by someone a generation or two later.

Words that encourage, remarks that compliment, and notes that express thanks. I hope that those are the words that matter, not just for today, but for tomorrow, too.