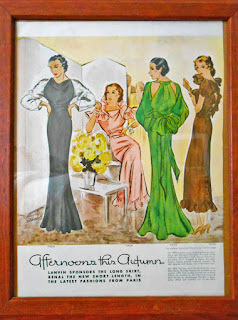 The first time I saw a vintage dress form displayed as a decorating feature in a magazine spread, I knew I wanted one. I started noticing that dress forms could be used to display jewelry, clothes or accessories. I thought they looked French and fabulous. The more worn and tattered, the better. I had visions of turning a corner of my living room into a fashion house with my dress form wearing haute couture and my 1930s and 40s fashion ads from womens' magazines hanging on the wall behind it.

Although I occasionally saw dress forms in antique shops, I never found just what I had in mind, with the right vintage look or at just the right price. I never lost hope, though, that someday I might find the perfect one.

Several years after I was first smitten by dress forms, my mother called me, very excited. “You’ll never guess what I found for you,” she said.

As my mother drove through her neighborhood on her way home one night, she spotted a dress form out on the curb for trash pick-up. She screeched to a halt and knocked on the door to ask if she could have it. Her neighbor said it had been his daughter’s but she no longer wanted it. He told my mother to take it. My mother then had to roll the dress form down the street on its metal base since she couldn’t fit it in her car. (I can only imagine what that scene looked like.)

I couldn’t wait to see the rescued dress form, and when I did, it was love at first sight. I had no idea how old it might be but it looked very stylish and vintage to me. On a black metal base with wheels, the mannequin was covered in tan fabric and was adjustable. The clasps that moved the form from size to size were rusty and after one try at adjusting them, I thought I’d better leave her as-is.

Yes, her. She seemed to take on some sort of a persona after I wheeled her into my living room and twisted a string of pearls around her neck. When I wrapped a red bolero jacket around her shoulders, she seemed to stand a little prouder, glad to be back in service again, modeling beautiful garments like she did in a former life. She’s now the perfect display for my grandmother’s jewelry, vintage clothing and chic accessories.

I guess the old expression that one girl’s trash is another girl’s treasure holds true to form.