Spinning and Twirling in Pursuit of Skating I love figure skating. With a passion. Some years, my skating girlfriends and I travel to the US national championships and spend an entire week inside a freezing rink watching practices and competitions from early morning until late at night. It's our idea of a dream vacation. For many years, I took skating lessons every week. But recently my instructor moved out of state and my skating time has been put on ice. Occasionally, I take my niece and nephew skating. Nathan liked it so much he had a skating birthday party this year. But Devon’s not so sure. She likes the idea of skating but finds the reality of staying upright on her feet more challenging. The first time she skated, it seemed like it took us an hour to circle the entire rink as I either pushed or pulled her along, with her legs like noodles. She said, “Skating is so hard!”

She’s right. Skating is hard work. But ever since I was a little girl and watched Peggy Fleming, I’ve loved skating. For my fifth birthday, I requested to go to the Ice Capades. My mother said I fell asleep halfway through the show, but a lifelong love of skating was born. It looked so effortless, I was sure it would be easy. After begging my mother for lessons for years, she finally signed me up for a group class when I was 13. I quickly discovered that skating is a lot harder than it looks. There would be no triple toe loops for me. More like half-jumps. Half-lutz, half-salchow, half-flip. I loved attempting them all. After years of practice, I could do a single toe loop. Sort of. My coach said it was possible that one foot left the ice for a millisecond before the other foot landed. But I celebrated the accomplishment nevertheless. When I moved to Florida after college, I signed myself up for group lessons again and found new skating friends and eventually a coach who didn’t mind teaching adults. Skating as an adult is a lot more fearful because you know what can happen when you fall and hit the ice. And it did happen. I broke my wrist skating. Twice. Same wrist. Wristguards are now a permanent part of my skating attire. But being fearful made me hesitant. Not so willing to take risks.

Then I met Amy, who was also a student of my coach Liz. Amy was a much more advanced skater than I was and she skated in competitions around the state. I had no idea there were competitions just for adults. I gladly cheered her on but had absolutely no desire to compete myself. Until she showed me her medal. It was just like an Olympic gold medal. Hanging on a ribbon around her neck. I saw photos of her on the winner’s podium. Sensing a flicker of interest, she started coaxing me to compete with her in the all-adult competition held every fall in Atlanta. She brushed aside all my excuses and assured me we had months to prepare. There were skaters of all levels at the competition. It would be FUN. When I reluctantly agreed, I had no idea what I was in for. I had to first take a test with the US Figure Skating Association that would allow me to compete. I had to skate in front of real skating judges. I was the only skater on the huge rink as the judges graded my stroking, crossovers, turns and edges. I was so nervous and shaky, they asked me to repeat one of the elements before finally passing me. Talk about nerve-racking. 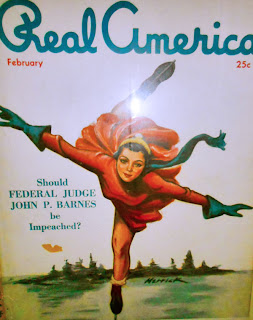 Amy and Liz designed a one-minute program for me to an orchestral rendition of the Beatles’ “Ruby Tuesday.” When I either finished my routine far before the last bar of music or continued skating long after the music concluded, Liz wisely decided I would compete in the programs-with-no-music category at the competition. Amy set our practice schedule for three nights a week for months while we trained for the competition. She unflaggingly cheered me on and infused confidence into my fragile skating ego. She helped me choose a ruby red skating dress. That I couldn't believe I had to wear. In public. At the competition. Was I crazy?

The weekend of the competition, we packed up her van and drove to Atlanta. As soon as I arrived at the first practice session, I immediately regretted my decision to compete. These adults were amazing skaters! Everyone skated so fast, I was practically run over. If I was so intimidated by the practice session, how would I survive the actual competition? I had registered for two events and the first one was early Saturday morning. As I laced up my skates, there were only a handful of people in the rink and although I was nervous, I completed my elements and placed third. A bronze medal was mine! I got to stand on the podium and have my photo taken. At long last, I felt like a REAL skater. My euphoria lasted until the afternoon. When it was time for me to skate my program without the music. The rink’s bleachers were packed with spectators, thanks to a popular men’s event that had concluded just before mine. I had a complete nervous breakdown. 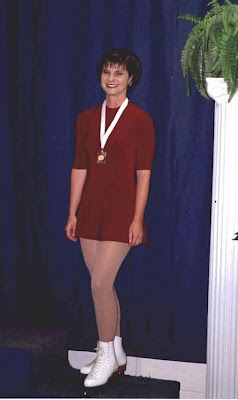 “I can’t go out there in front of all those people!” I shrieked at Liz. “I don’t need to do a second event, I’m good with the medal I already won. Can't I withdraw?” My pleas were to no avail. She said I came to compete and I was going to finish what I came here to do. Then I heard my name announced. It would look ridiculous if I didn’t skate now. I glided out to center ice. My knees were shaking so hard, I was sure everyone in the rink could see. I thought I would collapse. The judge nodded for me to start. It was the longest 60 seconds of my life as I laboriously pushed through my program. I felt like I was in slow motion. My best move was a Michelle Kwan-esque deep knee bend pivot. Finally, I stepped into my two-foot spin and wondered if I would make it around the required three revolutions. Amazingly, I finished fourth out of five skaters. I couldn’t believe I wasn’t last. And fourth place earned me a pewter medal! I didn't even know they gave medals for fourth place. I was ecstatic. That the competition was finally over.

I had no idea that entering that competition would be so stressful, require so much hard work and dedication. My friend Amy continues to compete. All the way up to the top competition in the nation for adult skaters. She admits to finding the competition atmosphere a rush. I never want to compete again. But thanks to Amy and Liz, I am so glad I have the extraordinary experience of skating in a competition in the scrapbook of my life. I had watched skaters compete in championships and the Olympics my whole life. And I got to live in a little corner of their world for a short time. I’m proud that I did something so far out of my comfort zone, it was in another galaxy. But I put my fears on ice. My fear of people watching me. My fear of doing something that I wasn't close to being perfect at. My fear that I could make a fool of myself. My fear that I might fall. But Amy’s encouragement and wholehearted belief that I could do it stretched me. Added an unimaginable adventure to my life. If I talk about the competition, sometimes people look at me, incredulous. You? Compete? Yes. Me. I was a competitive skater. For just a few months. I have the photo to prove it. And the medals. 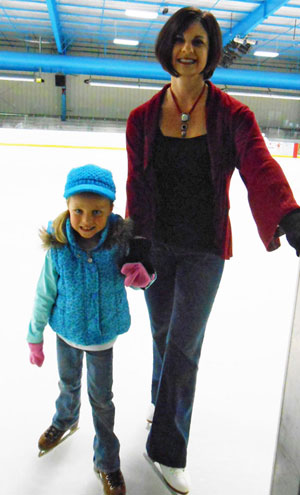 I still love skating. Last week, Devon and Nathan were invited to a friend’s birthday party at the skating rink. Devon wanted me to go along. I was the special guest at an eight-year-old's birthday party. But I didn't mind because a skating party is my favorite kind of party. For the first time, Devon skated by herself without holding onto the boards or holding onto my hand. She skated one entire lap around the rink. She was so proud of herself. So was I. She said, “I ALWAYS want you to go skating with me.” That's music to my ears. That makes my skates want to do a little half-flip. No matter who is watching me.
Email Post
Labels: Skating