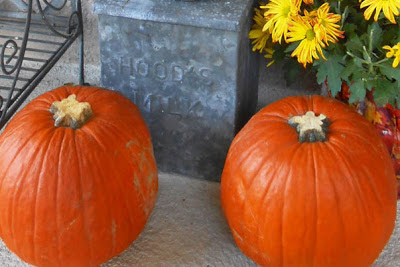 When the calendar says it’s fall – or when the nighttime temperature drops below 70 degrees in Florida, whichever comes first – I think about baking pumpkin cookies. They were one of my grandmother's specialties and she would send a batch of them to me every Thanksgiving, stacked in a sweater box, separated by layers of wax paper. The cookies are delicate, more like tiny little cakes than cookies, filled with raisins and topped with a caramelized frosting. They’re so light that the first bite just melts in your mouth. Then just as you’re savoring the next two bites, the cookie is gone and the deliciousness is just a memory. You have to have another. And another. The cookies remind me of fall, the holiday season and my grandmother. 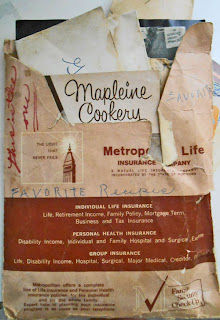 She didn't use cookbooks or have a recipe box. She kept her often-used recipes in her head and never wrote anything down. When my mother cleared out her house after she died, there was a worn Metropolitan Life insurance envelope with the words “favorite recipes” written on it in her handwriting. I leafed through it, thinking in there would be the secrets to her favorite dishes. But that’s not what was in the envelope. Instead, it held recipes clipped from the newspaper from the 1960s and 70s. They weren’t really any dishes I remember her making. I think she must have cut out recipes she thought she might try one day. There were several recipes for sauerkraut as a key ingredient. A few recipes for jello, pies and cakes with strawberries. There was even one in her handwriting for ginger cookies and she noted “delicious” at the bottom. She baked from memory and experience. Thankfully, the recipe for pumpkin cookies was well distributed throughout the family, as I remember my mother making them for Halloween and my aunt making them for our Thanksgiving dinners.

My niece Devon and I made pumpkin cookies last weekend. She couldn’t wait to taste them, sniffing the pumpkin, vanilla and cinnamon as we mixed up the batter. Since she only likes chocolate chip cookies, I was pretty sure pumpkin would be an acquired taste for a five-year-old. She took one lick of the icing and a tiny nibble of the cookie and proclaimed it the worst cookie she’d ever tasted. I told her that someday she just might like pumpkin cookies when she was a little older. She frowned and said she sure doubted it. She walked off leaving me with the plate of pumpkin cookies all to myself. As I savored the heavenly little puffs of deliciousness, I knew I'd keep the recipe for her. Maybe she'll remember the smells of fall and pumpkin and warm gooey frosting in her aunt's kitchen. And I hoped that maybe someday in the not too distant future, she too would fall head over heels for pumpkin cookies. 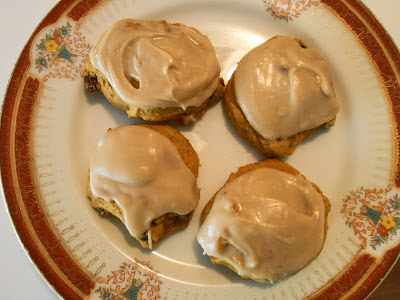 Cream butter and sugar well and add the egg. Beat in the pumpkin and salt. Cream well. Sift together rest of dry ingredients and add to mixture. Add vanilla and raisins. (Plump raisins first by soaking them in a bowl of very hot water for 10 minutes.) Bake at 400 degrees for 10 minutes.

Frosting
Mix 4 Tbsps. butter and 4 Tbsps. milk and ½ cup brown sugar in medium saucepan on stove. (I use ¼ cup of dark brown sugar and ¼ cup of light brown sugar.) Cook for 2 minutes, stirring constantly. Let cool (place in freezer for a few minutes.) Add 1-2 cups of powdered sugar (depending on thickness) and 1 tsp. vanilla. Beat well. Frosting should be medium thick (not too thin or it will drip off the cookie). Spread frosting while cookies are still warm.
Email Post
Labels: Family